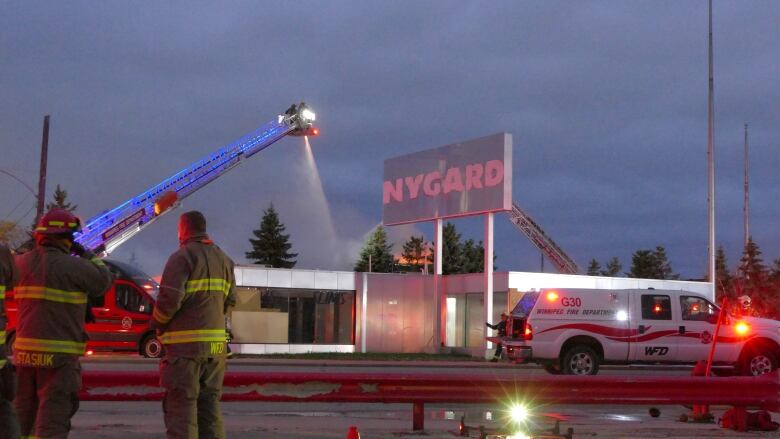 A Winnipeg property that once belonged to former fashion mogul Peter Nygard is on fire.

Crews were met by heavy smoke and flames when they arrived at the warehouse at Notre Dame Avenue and Clifton Street around 6 a.m. Tuesday.

Notre Dame, between Weston and Flint streets, is blocked to traffic, causing headaches during the morning rush hour.

“This is expected to be a prolonged event,” a WFPS spokesperson said in an email to CBC News.

The one storey-building is attached to the back of a former storefront for the Nygard clothing company.

At least six fire trucks are at the scene, including ladder trucks with firefighters pouring water onto the blaze from above.

Crews are in a defensive mode because conditions have made it unsafe to enter the building, Enns said.

The roof has collapsed.

There was a lot of weight on the roof from air conditioning units along with a number of propane tanks that belonged to a roofing company that had been doing some repairs recently, Enns said.

“We declared a collapsed zone and pulled all the crews away,” he said.

Crews have been soaking the propane tanks to keep them cool and prevent them from exploding, he said.

There is no reason to believe the work on the roof is connected to the fire, but an investigation will occur to determine the exact cause, Enns said.

“The damage will be substantial,” he said, but he couldn’t say yet if the building will need to be razed.

The building was put up for sale in 2020 after Nygard’s companies went into receivership.

At the time, Nygard said he lived in an apartment in the warehouse for 40 years when he wasn’t at his home in the Bahamas.

He said a bankruptcy receiver changed the locks on his suite while he was away and refused him entry.

Nygard made a bid to keep the property and his lawyer argued his client’s tenancy rights should be considered if the Manitoba Court of Queen’s Bench planned to approve an offer to purchase the property.

“It was always my intention to continue my residency at 1340 Notre Dame during the summer, even though I spent most of my time at my summer lake residence,” Nygard said in an affidavit in June 2020.

Earlier this month, Nygard, 80, consented to move forward with the process for extradition to the United States, where he is charged with sex trafficking and racketeering. He has also been charged with multiple counts of sexual assault and forcible confinement in Toronto.